The sound of dozens of feet striking the pavement was silenced as the pack of runners reached the grass of the 5k course in the Voice of America Park.

“I’m not doing too bad,” I thought to myself, as I kept up with the guys varsity team on the practice run.

But… that didn’t last long. One mile in and my body began protesting. “Do you have any questions?” someone asked. “Nope,” I said, as I tried to gulp the air my useless lungs demanded.

“Hey, if you have any questions you can just ask,” I heard not long after.

“Just focused on running,” I replied with effort. Less than two miles in, and I could barely talk. I tried to remember what I’d learned in PE–what now seems like an eternity ago. Breathe in, breathe out. Don’t think about how hard it is, just run.

I didn’t understand how they could chit chat as they kept the pace. My legs hurt, my sides ached, and oddly enough, so did my toes. I felt like my shoes were heating up.

“We could slow down,” I heard.

“No worries,” was the last thing I said.

I really tried to keep up, but long before the third mile mark, I was falling behind.

Breathe in, breathe out. Don’t think about it, just run. I repeated the same mantra to myself again and again. And the distance between us increased. Other kids started catching up and passing me. Younger kids. Shorter kids. Wait, freshmen?!

I had to keep on running. if I stopped I knew that’d be it. But my steps became ever shorter. This was embarrassing, but my mind and my body were not on the same page anymore. I came upon some middle schoolers on the track and forced myself onward. Ta hell my toes!

I saw one of my friends ahead, probably on a different lap, going at an even slower pace than my own. OK, maybe I wasn’t dead yet. I pressed on and saw the sign for the final stretch. I glimpsed some of the younger kids ahead, and decided that it’d be fine to pass out if I sprinted. Better than this humiliation.

Between a blur and a haze, I stumbled ahead. Somehow or other I made it to where the guys were idling by. “Hey! That must have been your fastest 5k yet!”

I didn’t answer. Too busy gagging, gasping, and trying not to faint. This wasn’t a cake walk. This was cross country.

All drama aside, I had a really nice time with the cross country team. Everyone was open and friendly, and I was able to verify with my own eyes what I’d heard all along about the sport and community.

In the words of sophomore Lucy Schaefer, the cross country team has “such a good atmosphere,” like “one big family. Everybody supports each other.” And while each individual is scored separately, it really is “more of a team sport,” as Lakota West junior Kieran Quebman says.

Not only do the runners encourage each other, but they have group activities like pasta dinners, which are “always a blast,” and the fundraisers that they hold as well.

It is interesting to note, however, that the guys and girls do take different approaches when it comes to “encouraging” each other. The girls, for example, begin each season by making tie-dye t-shirts which helps them get to know each other and quickly become friends. The guys on the other hand, prefer to “throw shade,” a passive-aggressive way of egging each other on, as senior Luke Wilson explained. But it’s all in good fun, and everyone knows it.

Everyone at XC is there because they love to run, but also because they really do enjoy being a part of the team. Mostly this is because of the community, but each person has their own special reasons. Coleman Cronk finds running “more enjoyable with terrain,” Gwenyth Barnholtz likes being part of a “team sport” where she still has to “push herself,” Luke wants to beat his brother’s time, and Zach Beneteau, West’s fastest runner (more on him in our Athlete’s Spotlight), said it clearly: “running is what I do.”

West XC had a great season, with great improvements on their PRs (personal records). The guys ranked 2nd in Districts and made it to Regionals, from where Zach will go to State. Likewise, there are promising chances for next year. A solid group of Juniors will ensure that that they’ll still be strong next year. Hopefully the whole team will move up.

The future also looks good for the girl’s team. They suffered from having many injured runners this year, but a group of strong 9th graders ought to keep them on course. 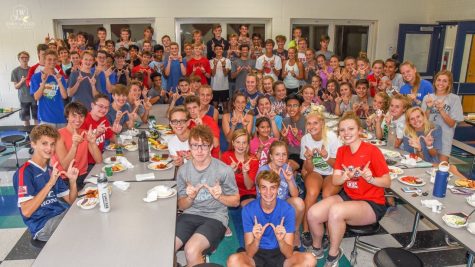 People may joke that cross country requires no skill, but I know that it takes a great deal of endurance and mental preparation. The runners of West are truly amazing, not just because of their results, but because of the community they’ve built, helping each other to always be better. I wish I could quote everyone with whom I spoke, because these are people who, when the going gets tough, keep on running. That’s what I learned at XC, and will never forget.