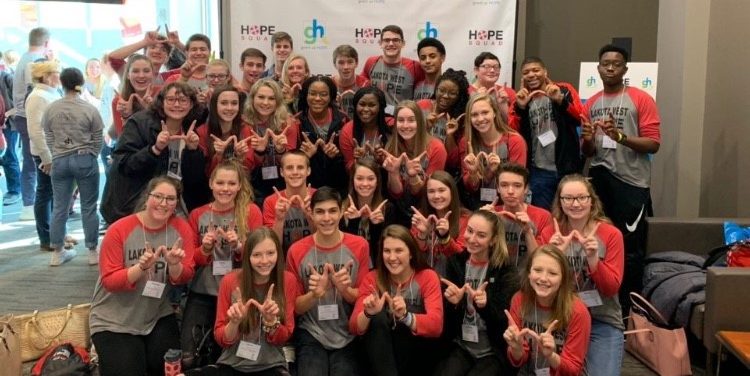 Imagine being approached by someone who said they were suicidal. What would you do? Would you handle the issue yourself, or tell someone else your friend’s secret? Try to find someone who might be better prepared to help? These are questions that both teenagers and adults face.

But not all people facing these sort of difficulties reach out. Mental illness often causes isolation and makes people, especially teenagers, withdraw into themselves. This is itself a warning sign, but who is supposed to recognize this? Young people today spend most of their day either at school or in school-related activities. But are we really expecting that teachers keep watch over every single student and monitor their emotional state? Perhaps some students could help out and be a positive influence, encouraging others and learning about the problem to better address it.

It was this thought that first lead Dr. Greg Hudnall to create Hope Squad, which was introduced to Lakota West during the 2018 school year. Students first nominated those they wished to see in Hope Squad from among their peers. The 80 students chosen then spent the year attending training sessions. “We were taught about suicide and how to recognize the warning signs in others,” and how to “spread awareness on mental health, and reduce the stigma” reported senior and Hope Squad member Taysha Brune.

This all seems like a good idea, but most students interviewed at West seemed far from enthusiastic when it comes to Hope Squad. For starters, there are some to whom the name doesn’t mean anything and while those that do remember having heard it, have misinterpreted their mission. “They set up events and deal with bullying” thought D. Jett. From those who were closer to the mark, we got mostly skepticism. Other than the random inappropriate comment, criticism of Hope Squad seemed to center on the fact that you “don’t see what they’re actually doing,” as told by senior Stella Lukusa. Similarly, many said essentially the same thing: “I wouldn’t go to Hope Squad if I were dealing with stress or depression.” Most people young or old thought they would trust their friends if they have a problem before seeking more “professional” help.

This is worth repeating, because members of Hope Squad were not trained to be professional therapists, but only to recognize distress signs. “If we recognize them, we’re supposed to follow QPR (Question, Persuade, Refer),” says senior and Hope Squad member Luke Wilson. Members are aware that they won’t always be qualified to handle students in need, so they are informed of appropriate resources to offer. In short, Hope Squad members are supposed to be friendly and approachable, spreading a positive message and being a healthy presence in the school community. That’s why they organize Hope Week and other events like the Homecoming egg hunt.

Unfortunately, Hope Squad’s work has been limited due to their emphasis on training last year, and the fact they lost two of their adult advisors at the beginning of the year. Still, Hope Squad members look forward to the rest of the school year.

When we interviewed members of Hope Squad they seemed to be well aware of their situation and enthusiastic about their goals. “I am super passionate about helping others,” commented sophomore and Hope Squad member Lora Broz, “I will do anything I can do to spread awareness and to try to help the teenage society to understand this very heavy, serious topic.”

Honestly, there is an unfortunate divide between Hope Squad and many Lakota West students, but it stems from a lack of communication and understanding. It is hoped that, this article can help dispel the myths and clarify misunderstandings. “Good thing it’s new,” said Lukusa, “and has room to grow.” And while it did have a “bumpy start” like Broz said, according to sophomore and Hope Squad member Ben Zimmerer, “Hope Squad will always be there for people who need help and it will continue to be a part of Lakota West’s community.” So let’s give it a chance, shall we?